Mandatory face mask in the queue, visitor's Centre and at the cash desks.

Update 30/11/2020: The Abbey remains open everyday from 10 am to 5 pm (last entry at 4 pm). The Folon exhibition is accessible during this time slot. No reservation necessary. The shop is still currently closed. 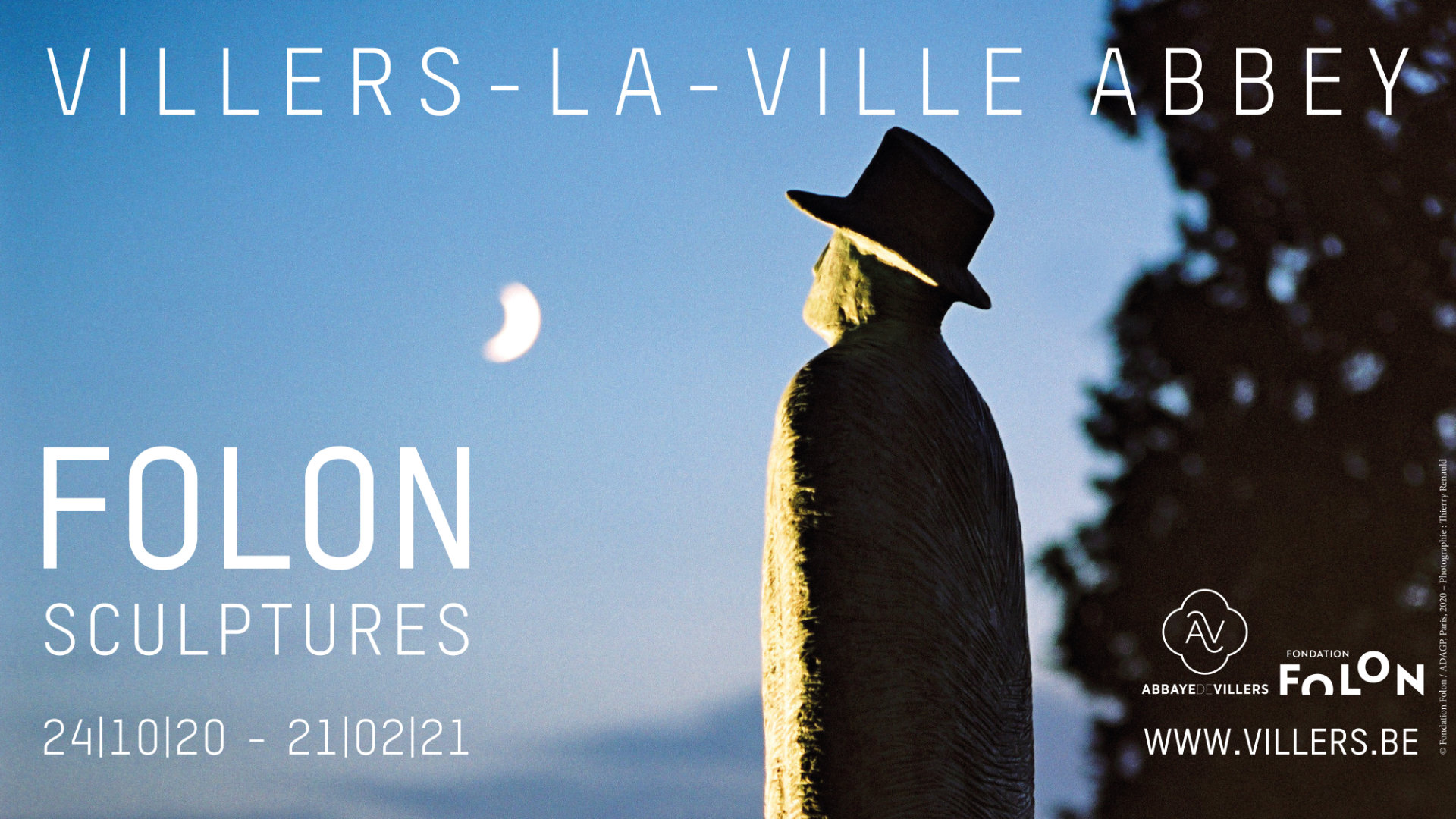 As part of the 20th anniversary of the Folon Foundation, the Abbey - in collaboration with another cultural centre of Walloon Brabant, the Folon Foundation - is delighted to organize an exhibition of twenty monumental and original sculptures by the internationally renowned Belgian artist Jean-Michel Folon. The exhibition echoes the publication of a beautiful art book devoted to the sculptures of the artist (Mercator Fund).

The Abbey's proposal to host some 20 sculptures among the most evocative of the artist, is part of the tradition dear to Folon of confronting his works with the beauty of a monumental, historical and architectural place and seeing how they respond to the light and the seasons. Here, the sculptures are confronted with the spirituality contained in the old stones of the Cistercian site, as well as with the colours of autumn and winter.

After starting as an illustrator and painter, Jean-Michel Folon (1934-2005) embarked on sculpture at the end of the 1980s, as a second wind in his career. In 1995 his first exhibition of monumental sculptures took place at the Petit Sablon in Brussels. Other exhibitions follow in extraordinary places: at the Castle of Seneffe in 1996, in the small Tuscan town of Pietrasanta in 1999, at the Castle of Saint George in Lisbon in 2001, at the Forte di Belvedere in Florence in 2005. Memorable exhibitions have also been held after the artist's death, such as the one in the Solvay Regional Estate in La Hulpe in 2008, or more recently in Saint-Tropez in 2019.

Whether through his posters, his illustrations, his television shows and his numerous exhibitions, Jean-Michel Folon (1934-2005) left a worldwide mark on the collective imagination of the last third of the 20th century. Humanist, he leaves a figurative and poetic work, anchored in traditional techniques and, therefore, atypical in an artistic panorama dominated by conceptual art. His universe, which was initially very dark, evolved, depending on the artist's great struggles in favour of human rights or environmental awareness, towards an appeasement from the 1980s. In 2000 he created the Folon Foundation in Solvay Park, in La Hulpe, a museum that houses his work. The Foundation celebrates its 20th anniversary in 2020.

Folon's sculptures, the culmination of his career

Sculpture occupies a special place in Folon's work. It was a challenge that the artist resolutely accepted in the second part of his career. Folon has always collected decommissioned objects that inspire him, with the aim of resuscitating them in kinds of ready-made.

During the 1990s, encouraged by his friend César, the artist resolutely embarked on statuary, sometimes monumental, whether in direct carving (wood, plaster) or in modelling. Characterized by their frontality and their corporeality, enhanced with multiple patinas, his sculptures draw on the primitive arts, from the Cyclades to the Etruscans, from African masks to Native American totems. Largely centred on humans, they embody themes formerly treated graphically and thus project the artist's universe into atypical and natural environments: landscapes, gardens, parks, galleries.

This approach finds its culmination on the beach of Knokke where Folon installed in 1997 a bronze figure, eternally patinated by the tides (The sea, that great sculptor).

The temporary exhibition ‘Folon’s sculptures at the Abbey’ is visible from Saturday 24 October 2020 to Sunday 21 February 2020.

Prices: access to the abbey is included (no surcharge).

A visitor's notebook will be on sale at the entrance.

WATERCOLOUR WORKSHOPS Folon. Sculptures at the Abbey in French, Dutch and English

The Folon Foundation and the Abbey offer watercolour workshops for adults at the Abbey, as part of the exhibition Folon. Sculptures at the Abbey.

The watercolour workshops are given by Catherine Deryck, animator of the Foundation, one Saturday morning per month. Participants explore the exhibition in order to soak up Folon's sculptures and the atmosphere in the Abbey. The group will continue the workshop indoors, for two hours, and are supervised by the animator to learn about the artist's favourite technique: watercolour. From 18 years on. (No pre-requisites required.)

Each workshop is different. Wearing a mask is mandatory.