From 26 October to 11 November 2019, the Villers Abbey  and Numeric’Arts will once again join forces for the exhibition on digital art ‘Digital Contemplation’, which is organized in the heart of the site. Combining digital art and heritage, and  linking echoes from the past to the contemporary, is the fundamental purpose of this second opus, which gives a new interpretation of the two via the digital spectrum, the most important way of expression today.

Digital arts in the Abbey

From Victor Hugo to today the Abbey has amply inspired the artistic imagination. The numeric world, the preferred medium in our contemporary society, for its part has produced works that combine sensitivity, modesty and grandeur. The astonishing link of the digital with a heritage site invites young and old alike to take a different look at the historic domain and its old stones, during a walk that gives the aesthetic codes a new look.

This autumn, the works of Stéphanie Laforce, Kika Nicolela, Raphaël Vens, Mike Verlinden and Cédric Dermience, representative artists in the field of digital art, will be displayed both inside the Abbey and on its grounds by Numeric’Arts, a non-profit organisation that is committed to the promotion of both recognised Belgian digital artists and rising talent.

in the scale room, which is located in the Mill, Stéphanie Laforce unfolds her dreamy atmosphere to create a truly immersive experience. The audience is invited to operate a hybrid instrument, which is the result of a combination of an old sewing machine and a digital installation designed by the artist. This creates a real-time dialogue between the location and the ‘visitor-players’ who become the actors of a collective acoustic improvisation for a short period of time. 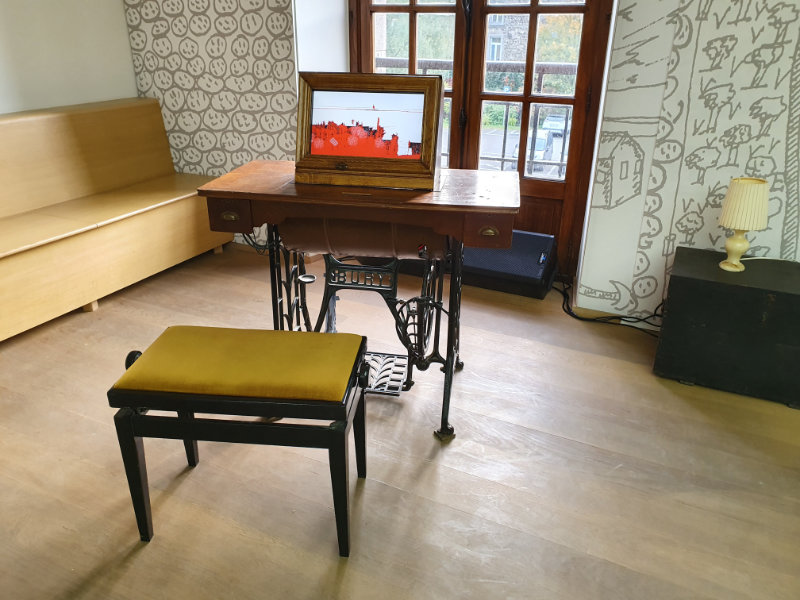 Raphaël Vens  takes  advantage of  technology to capture the antique frequencies that are hidden in the Abbey. He evokes a common practice from ancient times. His work has its roots in antiquity and in some churches of later dates, where vases were inserted into the walls to improve acoustics. They served as frequency resonators or receivers to alter the sound quality of the building. Starting from this architectural artefact makes the initiative of the artist truly universalist. After all, Raphaël Vens is convinced that, throughout the centuries, each human life has contributed to shaping the world in which we live today, and that our society is the result of billions of voices, whatever their role, function, era or environment may have been. His installation functions on the same principle: each voice, unique by definition, comes to compose a collective piece of music which, following the world’s example, continues to evolve.

Visual art often invites us to look at what we normally see in a different way. An example of this is  Cédric Dermience’s work, which appeals to the gaze, playing with the idea of remanence. The artist explores the link between, on the one hand, the human interpretation of a reality, subject to our experiences, our culture, our psyche, and most importantly our ability to register light, and, on the other hand, the camera’s capacity to capture a moment that’s invisible to the naked eye, as well as its capacity to represent a multiform reality. His works aim to criticise the modern world and the at times dramatic impact of man on the environment. Cédric Dermience presents works that are scattered throughout the visitor’s route and are composed of photographs taken on site.

With a literal invitation to descend into darkness and time, Kika Nicola is interested in the turbine hall of the south wing of the Mill, which lends itself to a range of impressions. With her installation Organum, where the fight between shadow and light, between coercion and freedom, materialises in the face of a woman, she shows oppression as a symbol of both the internal obscurity and the world obscurity to evoke a painful process of transformation. This realisation echoes the artist’s previous work, with its participatory approach and by asking questions about identity and otherness, communication, self-representation, story, reasoning, cultural stereotypes, and social roles.

The Lightbox by Mike Verlinden

Vision Nocturne presents FormaX and DigitalWool, two audio-visual and interactive installations which were developed during multiple residencies at the iMAL, the centre of digital cultures and technology. These installations create an abstract harmony, both sensory and immersive. The digital works, both aesthetic and playful, invite the public to discover their tangible, visual and sound dimensions through interactions that trigger projected animations. New geometric figures collide to the rhythm of electronic sounds and stimulate the exploration of new graphic forms of expression.

With Digital Contemplation, an event set up by Numeric’Arts in coproduction with Villers Abbey, heritage and digital art present themselves in symbiosis and come together in an intellectual and cultural walk.